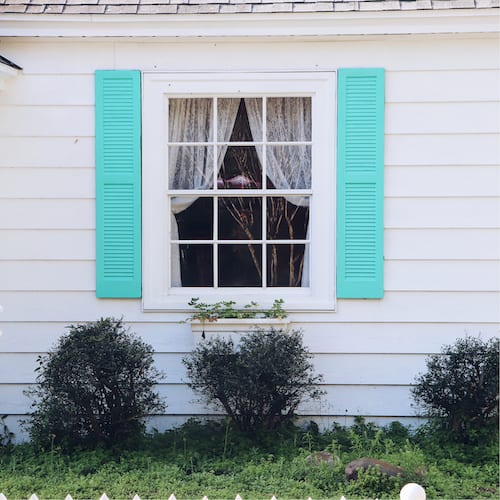 It’s true that I have a problem with fake shutters. If you follow my instagram page you’ll see a healthy spattering of shutter fails. They give me a little bit of rage that no other architectural element does (I’ve written about the other design flaws that drive me nuts here). The purpose of this post isn’t just to vent (though it will be therapeutic for me!), but rather to explain why something as insignificant as a fake shutter flies in the face of almost every rule of design.

My hope is that more people will see the mistake that fake shutters are and it will prevent even just one more house from giving its windows a black eye and making me that much crazier. Beware that once you read this post, you will likely be cursed like me in noticing the world of fake shutters on buildings everywhere. It will be like when the lights come on at the bar at closing time and you realize exactly what that person you’ve been dancing with all night really looks like. Be frightened!

Why do they exist? I guess because real shutters look so great that a lot of other people wanted to jump on the shutter band wagon but couldn’t afford real shutters. If your shutters don’t operate, you won’t realize just how bad they really are.

You see, real shutters…shut. It’s that simple. If your shutters don’t shut, they are fake. Shutters were designed to cover your window for a multitude of reasons. They protect against storms or other inclement weather. The provide relief from the hot summer sun and cold winter winds. They keep rain, hail, sleet and snow off your windows, and extend their life. They can provide privacy or help to darken a room for sleep. Shutters are immensely practical and useful.

But when you take a randomly sized piece of plastic and screw it to the siding next to your window and call it a shutter, you are fooling yourself and a few others, but no one who reads this blog anymore. In the title of this post I promised you the reasons why they get my goad, so I might as well dig into the details.

This is the most obvious and makes it easy to spot for just about everyone. If your window is 6 feet wide and your shutter is only a foot wide, who do you think you are fooling? You may not think it’s a big deal, but proportions matter. Putting undersized fake shutters on your house is like driving a big rig with 18 donut spare tires. It’s awkward and ineffective.

Real shutters are designed to be exactly half of the window dimension so that when you close both sides they cover the window precisely. Too small and they leave the window unprotected, too large and they won’t close. If you are going to get fake shutters then at least make it hard enough that my kindergartener can’t tell.

Reason #2 The Slats Are Wrong

This one is a little harder to see when flying by in the car but walking the neighborhood it’s abundantly clear. Here’s the deal: the louvers on shutters are designed to shed water…when closed. When they are open the louvres would be angled so that they are channeling water back onto the siding instead of down and away from the building like on fake shutters.

I can only assume that the genius designers of fake shutters did this because fake shutters only have one position they can be in and that is open. You’d think that before they designed their fake shutter they would have looked at how real shutters were, but apparently that was too much to ask.

Not every house style was intended to have shutters on it and certain house styles have shutter designs that are distinct to them. Shutters with pictures cut into a top panel were usually for Colonial and Colonial Revival houses. Board and batten shutters fit well on Mission and Spanish style homes, plantation shutters belong on southern plantation homes. When you take any random shutter design and put it on a house at random, you’re playing shutter roulette.

Just like kids need Garanimals to help them pick clothes that match, adults need a similar system for shutters on their houses. If you don’t know what style belongs on your house, then ask someone who does like.

Now that you know, start looking around your neighborhood. Are they too small? Too big? Are they permanently fixed to the building or worse yet, a part of the actual building themselves? Are they upside down, the wrong size, the wrong style? So many questions and so many fake shutters that it’s like a shutter-pocaplypse outside.

It may seem ugly out there, but now that you are aware of shutters you can truly appreciate a beautiful pair of historic shutters. A pair of real shutters added to the right window adds so much charm to a window it’s unreal. And I guess that beauty is what the fakers tried to duplicate. The truth is, nothing compares to the real deal, but you already knew that didn’t you?

And I went even further by making you guys a fun video! Check it out below for some great “advice” about vinyl shutters.

121 thoughts on “Why Fake Shutters Make Me Angry”