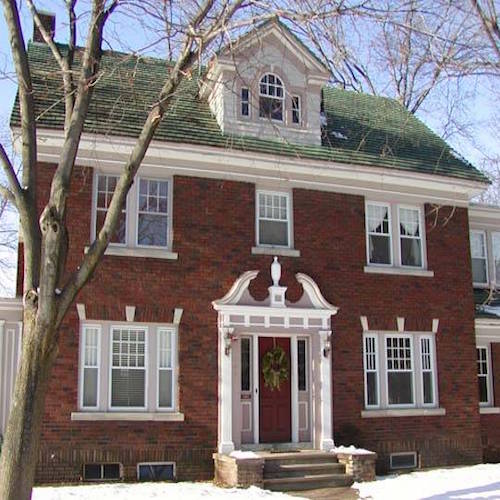 The Colonial Revival Style is the most dominate domestic building style of the first half of this century, and possibly one of the most diverse of all residential architecture. There are so many subtypes and variations that most of them are unrecognizable as belonging to this style.

Not only is it a diverse style, but it was extremely long-lived, ranging from about 1884 to 1955! Covering such a long span of time the examples of Colonial Revivals vary greatly depending on the period they belong to.

In 1876, America celebrated its 100th birthday and the nation became interested, arguably for the first time, in its own history and origin. Never a country to dwell on the past, Americans are typically a forward looking nation of doers and their architecture reflects this.

But in 1876 the whole country became fascinated with the colonial period, including a group of leading architects named McKim, Mead, White and Bigelow. This group took a centennial tour of New England to study the colonial architecture that dominates the landscape of that region, and went back to work with some new ideas for home designs that paid tribute to America’s beginnings. And in 1884, they built the 1st of the Colonial Revival Style.

The start of this style occurred during the reign of the fanciful Queen Anne and Victorian styles which rubbed off on Colonial Revivals built before 1900. The first examples are not very close to the originals they were mean to represent. Original Colonials were a simple house with a rather plain facade, but the earliest examples of the revival are often so dressed up that they are easy to mistake for a Queen Anne.

When the 20th century started, the revival became more similar to the original style it was meant to revive. The ornamentation typical of the Victorian age Colonial Revival gave way to a simpler form. The Classic Box was a prominent form of the style popular in this time (1900-1915) which is probably the form the differs the most from the typical. The Classic Box was so popular that it accounts for nearly 50% of all Colonial Revivals! Also during this time, gambrel roofed versions came into popularity which give a nod to the country’s earliest Dutch colonial beginnings. A gambrel roof is a roof which has two differing degrees of slope to it.

The style continued into the 1920s when you start to find more masonry versions instead of the more typical wood sided type as veneering techniques became more widespread. The later years of this style were dominated by the style most readily recognized as a Colonial Revival.

The side-gabled version is one of the most simple and efficient building styles in existence. Its shape is a simple rectangle and this results in quick construction, the most usable square footage, a simple and low maintenance roof due to the lack of any valleys (the weakest part of any roof), and the least amount of exterior wall exposed to the elements (which cuts down on maintenance and heating/cooling costs). And the final version of the style to appear was the Split-level or Overhang in which the 2nd story overhangs the 1st by a few feet.

It’s all in the details when it comes to distinguishing some Colonial Revivals from the originals, but if you know what to look for then the tells are pretty simple to spot.

Windows – A true Colonial always had either 6 over 6, 8 over 8, 9 over 9, or 12 over 12 windows. Paired, tripled, or bay windows never existed in the originals but are prevalent in revivals. Also common in the revival, are multi-paned top sashes with single paned bottom sashes which were never found in originals either.

Entrances – The biggest tell that a house is a revival and not an original is the entrances. Originals rarely had broken or segmented pediments (see brick colonial revival picture above) whereas revivals usually contain this element. Also, door surrounds are typically made of thinner material on revivals than on the originals, which were carved out of thicker wood by hand tools and therefore also show a slightly irregular profile when compared to their machine milled revival cousins.

There are Colonial Revivals placed across the country representing various time periods in our nation’s history. From the ornate Victorianesque early revivals to the plain one-story versions that appeared during the Depression years, the Colonial Revival is one style that has stood the test of time. Even today it is still a popular house style for new construction due to its efficiencies, simple construction, and sense of heritage that Americans feel about their country and their homes.