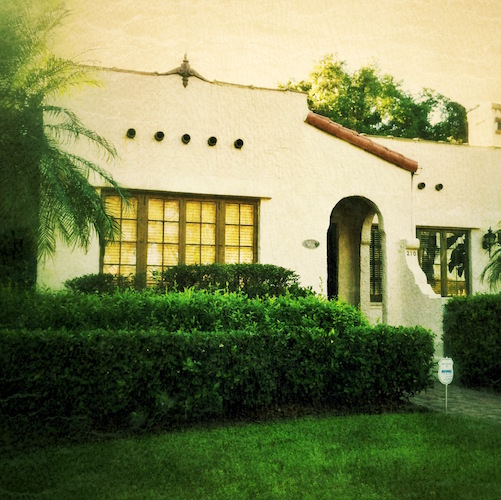 In areas of the country like Florida, Texas, California, and other southwestern states, the Mission style (sometimes called Spanish Eclectic style) was hugely popular in the early 20th century. This style was gaining in popularity early on and after being featured at the Panama-California Exposition of 1915, it exploded in popularity. So much so that the Santa Fe and Southern Pacific railroads designed all their stations and resorts in the Mission style during this time period.

The earliest examples were a high style version of the form and began appearing as early as the late 1890s. By the 1910s, the style had been adapted into a more common style that was an easy fit in boom time neighborhoods. The Mission style reached the height of its popularity in the 1920s and early 1930s and quickly faded from favor by the 1940s.

There are a few things that tell you you are looking at a Mission style home. Usually the dead giveaway is the red tile roof and stucco exterior walls. They represent quite a departure from the wood sided or brick homes that are most typical across America.

Arched Windows and Doors – Feature windows and doors on Mission homes are often arched. The doors, sometimes dramatically carved and ornate, are almost always unpainted and of significant weight. Often, the doors appear to have been made of several planks of wood bolted together vertically.

Chimneys and Vents – Chimney tops are often ornate or roofed with the same Mission or Spanish tile as the house. Attic vents and roof scuppers are built into the stucco facade in artistic ways.

Towers & Parapets – In more high style versions of Mission homes, bell towers and parapets are often found. Though many but the most glamorous are fake they add a beautiful vertical dimension to the home.

Tile – Whether it’s on the roof or on the floors, Spanish tile can be a beautiful thing in a Mission home. Often, a home will have a nice combination of natural clay tiles intermingled with painted ceramic tiles to create unique designs.

Mission style homes and other Spanish influenced styles like Spanish Colonial, Mediterranean Revival, and Monterey all add a beautiful counterpoint to the standard frame houses built in neighborhoods across the southwest, Texas & Florida. They are a unique, and often simple home built with a nod toward the earlier inhabitants of the area.

And rather than assimilate all architecture in America and bring it under one big heading of “The American Home”, these homes stand in distinct contrast, and because of that, have become a favorite of mine.