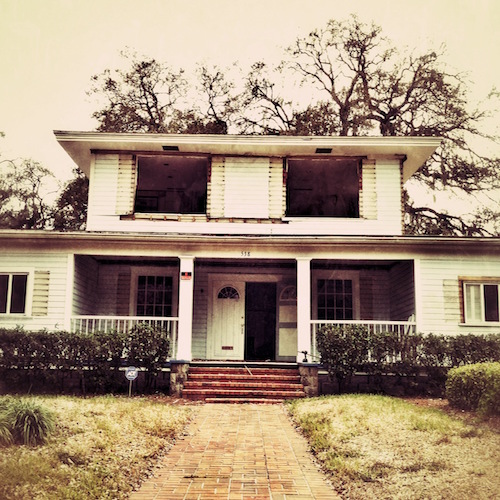 Last week I helped my friends at Florida Victorian Architectural Antiques with the salvage of four early 20th century homes on the banks of Lake Eola here in Orlando, FL. We were busy removing any parts of the home that may be of some value to someone in the future. Old wood windows were removed and sold off to a house in Daytona Beach. Heart-pine flooring was pulled and cleaned before being delivered to a home somewhere in south Florida. And I busied myself removing old shiplap siding and rough sawn cypress sub flooring.

It was a sad sight to watch these once magnificent homes being dismantled day after day. By the end of the week, they hardly seemed like the houses we started with on Monday. Windows and doors removed and boarded over. Siding peeled off its sides. Shadows remained where shutters once hung.
As awful as I felt about having to dismantle these historic homes so the city can make room for more “green space” (as if we need another lawn to mow in Orlando), it felt good to be saving as much as I could. The wood I was salvaging would be used to repair any number of old homes in the area. The shiplap siding I was collecting would likely be used on an upcoming project to restore the Montverde Town Hall that my company is doing.

It gave me hope that even though we were unable to save these four buildings, there were other people who recognize the value of historic buildings and historic materials. They want old buildings and the stories they tell. They appreciate walking into a home and feeling the warmth that generations of families have imparted onto the walls of what was once their home.

The stories that these homes told me as I peeled back the layers were equally intriguing. As I removed the subfloor from the upstairs of the house, pictured I found evidence of a fire at one point. Nothing to cause any structural damage to the house, but enough to blacken the floor joists and subfloor bottoms just inside the porch.

Then, as I removed each board of shiplap siding, I was greeted with an unusual surprise. I found cedar shingles hiding just beneath the siding. As I moved down the wall, board after board, the shingles eventually gave way to log siding (which is a rare sight in my part of the country). When had this been covered up? Why? It seemed to be in good shape still and not in need of replacement. So, I grabbed as many of the shingles as I could, hoping to find a project that they would be perfect for in the future.

After a week of salvage, our work was mostly complete. We packed up our trucks with one final load and left the homes sitting there broken and gutted. I’m sure the new park space will be enjoyed by the residents, but too soon the memory of these houses will pass into oblivion just like much of Historic Orlando already has. This city is notoriously quick to move forward and try to forget its past.

But as I pulled away, I almost felt like the houses were watching us. Like they knew what was coming. As I look at the picture above, I see a beautiful old house, battered and beaten, gathering its final shreds of strength to stand proudly where its builder meant it to be. It bravely prepares to face its coming fate with the same strength and dignity it has held for over 90 years. And the least I can do is write this short post so that someone, somewhere may know that it once stood when all that remains is a well manicured lawn.