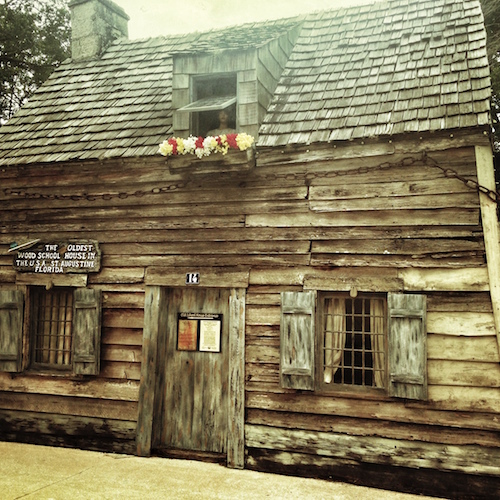 Recently, my wife and I went on vacation to the oldest city in America. Luckily, I have a wife who loves old buildings (almost) as much as I do! I wanted to share some of the history and pictures with you since it truly was an incredible experience.

What is the oldest city in America, you ask? Surely, it has to be in New England near the oldest house in America somewhere around Plymouth rock where the Pilgrims landed, right? That’s what most people think, but it’s not even close.

The oldest city in America never suffered through brutal New England winters. It has nothing to do with the Puritans or Quakers. It was founded before the British ever staked their claim in the New World.

Where is it? Think palm trees, beaches and orange juice. That’s right, Florida lays the claim to the nation’s oldest city.

St. Augustine, located on Florida’s northeastern coast just south of Jacksonville and north of Daytona Beach, was founded by the Spanish in 1565 and in 2015 will be celebrating it’s 450th birthday!

Discoverer Ponce De Leon (of the famed fountain of youth) “discovered” Florida while sailing from Puerto Rico on Easter Sunday in 1513. Of course, the discovery of Florida wasn’t exactly news to the Native Americans who had been living in the area for centuries before we Europeans showed up claiming lands for our home countries.

The city had a difficult start and was constantly raided and often burned by the English and French, but no invader was ever able to take the venerable fortress the Spanish built here, the Castillo de San Marcos.

Using locally mined coquina to build the fortress, the Spanish also covered the walls with palm trees which were extremely frustrating to attackers since both materials caused cannon balls to bounce off of the fort.

Brilliantly built engineering if you ask me!

In addition to eating some great food and staying in a beautiful Victorian B&B, I wanted to share some of the things that interested me the most.

The houses I usually work on restoring were built between the 1880s and 1940s. That’s old, but the construction of these homes is nothing like the way the old buildings of St. Augustine were put together.

The first place we visited was the oldest wooden schoolhouse in America (pictured above). It’s right on St. George Street in the old town where all the beautiful colonial age buildings have been restored and turned into touristy shops and restaurants. It’s a weird dichotomy of historical buildings and tasteless chotchkies.

We did try to drive down some of the streets in the old town and it was abundantly clear that these streets were not designed for vehicle traffic. Even making a left or right turn sometimes required a 3-point turn just to avoid scraping the ancient coquina walls.

Just a few blocks away, we reached what is referred to as the “Oldest House” which was strangely not on the Oldest Street. A lot of the city’s history had been burned in raids and so I can only guess the Oldest House is the oldest one still surviving.

The house claims to have been built in the mid to late 1600s, but only has records to justify ca. 1723. From the materials and style of construction, the house definitely looks to be built in the earlier dates to me though.

The first floor was built with thick coquina walls and then has a later addition of a wood frame second story built during the British period in the 1770s. It was a personal residence originally and became a popular tavern for soldiers in the late 1700s.

In the 1880s, new owners turned the colonial house into an extravagant Victorian tourist trap museum. It was later restored to its current state (which is closer to the original) when the historic society bought and renovated the house in 1918.

There is really too much to share for one post. If you’re a history buff like me, then the city is a huge treasure trove to discover.

Little details like the only remaining tabby wall (a mix of ground oyster shells, sand and sea water that forms a early type of concrete) in the country are hidden around ever corner.

There is Flagler college and the old Spanish Fort. Beautiful beaches and tons of shopping and antiquing. Great Spanish food and frightening English food. It’s all here for the exploring.

It may be the oldest city in America, but every time I visit there is something new to see!

10 thoughts on “The Oldest City in America”