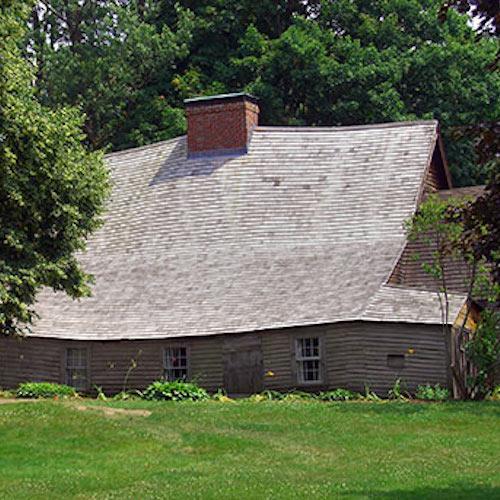 When you go back centuries to colonial times, records are not quite as complete or straight forward as they are today, but there are many ways to determine the age of a structure.

The oldest house in America is a timber frame house built ca. 1637-1641 in Dedham, MA called the Fairbanks House.

The house was built by Jonathan Fairebanke for his wife Grace Lee Smith and their family sometime between 1637 and 1641 according to dendrochronology testing. The house passed from one member of the Fairbanks family to the next through eight generations until 1904 when it was passed to The Fairbanks Family Association, which continues to operate it today as a historic house museum.

On a side note, the home has never been encumbered by a mortgage in its entire 377 year history! Eat your heart out, Dave Ramsey.

The original portion of the house is constructed of thick oak timbers and divided into two lower rooms with two second story bedrooms and an attic all surrounding a massive central chimney. The large central chimney was a typical feature in New England homes of the period as it would radiate heat throughout the home during the brutally cold winters.

Even back then, there was insulation. No, it wasn’t fiberglass batts, but rather wattle and daub which is a mixture of clay, straw and lime. This filled in the spaces between the timber frame as in English Tudor style homes.

Like most really old houses, the Fairbanks House has been added on to many times over the last four centuries. Several small additions were made in the 1680s and a rather large addition in the 1790s. Despite these additions, the home has remained largely unchanged and is a truly amazing example of life in these centuries past.

If you’re ever in Dedham, Massachusetts, make a point to stop by and see this spectacular example of early American vernacular architecture that has stood proudly through every part of American history, even before it was America.

12 thoughts on “The Oldest House in America”