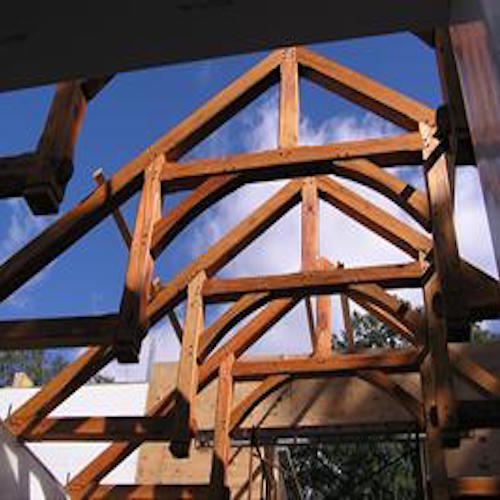 A house’s frame is like its bones. Without a sturdy frame, your house is one gust of wind away from collapse. The most common building material used to frame a house is, no surprise, wood. It’s strong, readily available, inexpensive, and extremely versatile. Wood framed houses typically fall into one of three categories depending on their age. Each of these techniques of wood framing have their own strengths and weaknesses. And if you’re up to a little detective work, you can usually discover what technique was used to build your home.

This is the oldest known form of wood construction, and no-one knows exactly how it started or when, but let’s just say it’s really old! In fact, the world’s oldest known timber frame building still in existence today is the Ise Temple in Japan built in 690 AD. Timber frame structures can easily last centuries due to their inherent strength and stability. And what’s more impressive, is that they attain this immense level of rigidity and staying power without the use of nails. Nails weren’t used extensively until the Industrial Revolution because until that time they were hand cut and expensive. Timber frame buildings avoid the use of nails by using complex mortise and tenon joinery to marry its posts and beams together tightly. And you won’t find any 2×4’s in an old timber frame house. The wood used in timber framing is much more substantial in size- 6×6, 8×8, 10×10 timbers are the norm.

Timber frame homes were typical across much of American until the late 1800s when it was surpassed by balloon framing. If your house was built before the 1830s, then it’s almost certain to be a timber frame home. An easy way to tell is to go into the basement or attic where the timbers are still visible. There you’ll find thick, usually hand-hewn, beams of locally grown timbers. The frame is completely self-sufficient unlike other forms of framing that require cross-bracing or sheathing to add racking strength and rigidity to the frame. While they are the strongest method of framing, timber frames have some drawbacks. However, they are all involved in the construction process. Once the frame is up and built out, I’ll take a timber frame over all other forms of construction any day. Timber frames require large pieces of wood which are not always readily available in certain locations and can be more expensive in materials than the standard dimensional lumber that is available at every lumber yard in America. Though timber frames can utilize ‘green’ lumber which is more inexpensive than dried lumber and this can create a near parity in the cost of lumber for the building. Timber framing also requires a master craftsman, or housewright to build and a skilled craftsman does not come cheaply. Anyone can drive a bunch of nails, but only a skilled housewright can make the perfectly matching joints required to secure a timber frame structure properly. A timber frame is usually the most expensive method of the three, but costs are coming down as of recent years. In the 1800s people started looking for a way to build houses faster and more inexpensively. Unless you were a skilled housewright, most people were unable to cut the complex joinery required for a timber frame house. At this time, dimensional lumber (2×4, 2×6 etc.) was quickly becoming available, along with manufactured nails thanks the Industrial Revolution and railroads. And balloon framing utilized these new materials. Dimensional lumber fastened with nails (not joinery), creates the frame of the house. The aspect that make it unique, is that the framing members run all the way from the foundation to the top of the second story. Balloon framed houses use some very long pieces of lumber. The balloon frame eliminated the need for skilled craftsman and therefore made the task of building a house available to the everyman.

There is plenty of debate as to exactly where the first balloon framed house was built and who came up with the idea. Chicago tends to get most of the credit though. It got its name rather dubiously though, as it was thought of early on as being such a weak form of construction that the houses would be carried away like a balloon on even the slightest breeze. Though not as strong and imposing as a timber frame, balloon frames were eventually regarded as a more than acceptable way to build a house. And from the 1890s until the 1930s it was the most common form of construction in the country.

The one rather large drawback to balloon framed houses is their fire risk. With wall cavities that are typically uninsulated and run the entire height of the building fire is able to spread quickly and often without notice. Balloon frame houses should be be retrofitted with insulation and fire blocking between stories to retard the spread of fires within the home. This risk is not one to be understated. By the 1930s, the risks associated with balloon framing had become apparent so the housing industry came up with the next great idea in framing. Platform framing is very similar to the balloon frame. It uses 2x4s spaced 16″ on center and requires the same basic layout except for a few key differences. A platform frame uses shorter lengths of lumber because each story of the building is built individually and placed on top of the one below. Shorter 2x4s cost less per foot than longer ones and the break between each floor created the much needed fire block not present in the balloon frame. Also, platform frames could be built without the use of scaffolding. Since each story was constructed on top of the previous one the second story floor could be used by workers to build the the second story walls upon resulting in much faster and easer construction.

Within just a few years the platform frame took its place as the most common form of framing and has continued to hold onto that title today.