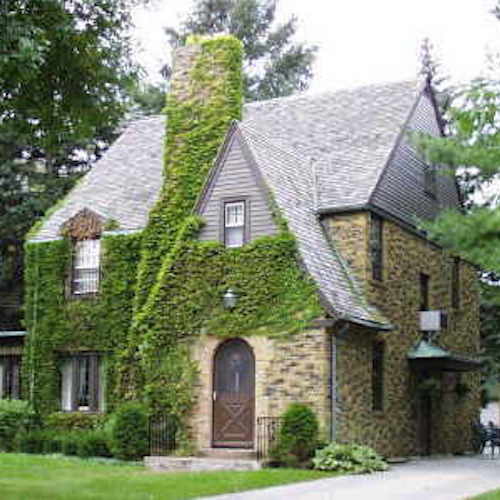 The Tudor style is one of the American Eclectic architectural styles that, like other American house styles, borrows heavily from the original Tudor style of England in the 16th century but adds its own regional American touches.

In America, the dates for this style are loosely pegged between 1890 and 1940, though the most popular years were the 1920s and early 1930s when it closely rivaled the Colonial Revival as the most popular style in the country.

The Tudor style combined the earthiness of construction from the middle-ages by using half-timbering.

Half-timbering was a method of construction from centuries ago that occurred when the exterior walls of a timber framed house were infilled with materials to weather-in the house. Most commonly this infill was wattle-and-daub (upright branches interwoven by smaller branches and covered by a thick coat of clay mud), laths and plaster, or bricks.

When the Tudor style became popular in America most half-timbering was simply decorative. The variety of half-timbered styles on Tudors ranges from ornate to simple, but is most commonly found in gable peaks and almost never on the first story.

Windows – Windows are usually casement and made of wood or metal with multiple panes often in a diamond pattern. They are often placed in groups of 3 or more and occasionally with a small group of bay windows called an oriel.

Doorways – This is an area where Renaissance detailing is often added with sometimes extensive stone work.

Walls – Exterior walls are usually either stucco in-fill when half-timbering is present or sometimes ornate brickwork. Often, herringbone brick patterns and crafted stone patterns are used for the same areas.

Larger more ornate examples of the Tudor style can be found dotted across the country, but more often they were of a more cottage feel as they filled in the suburbs of American in the early 20th century. The warmth of the old English countryside cottage was definitely channeled into the American psyche and came to its fruition in the Tudor style. This style represents a cozy nod to the home of our original founders and their long heritage as master builders with a lasting style.