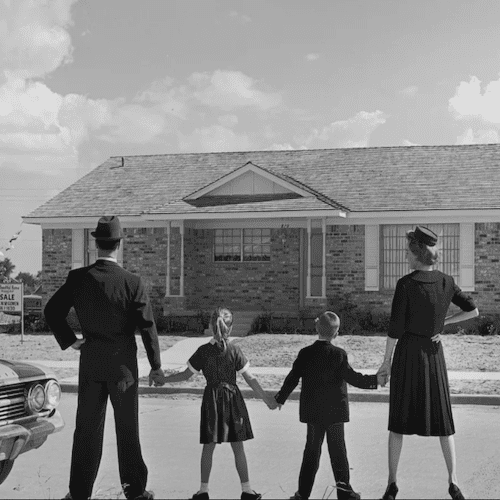 In the 1950s a new style home came on the scene as the house of choice in America. Born in California the one-story Ranch Style house was a dramatic departure from previous styles and was unabashedly modern in its design and feel. With an open floor plan, geometric designs, modern materials and conveniences the Ranch or “rambler” was a brave new world in residential American architecture.

Post-war America was booming and with the post war baby boom getting into full swing people wanted a simple, inexpensive, and modern home to fit their new peace time family life they intended to enjoy. Factories were transitioning from munitions to consumer goods and we had the ability as a country to make just about anything at the most affordable prices ever seen.

Ranch Style houses started showing up in the new suburban developments of the day like Levittown as the ads extolled the new modern life that was so enticing to the mid-century family. Technology began making its way into homes in a major way with the Ranch style as well. Automatic dishwashers, built in cabinets, space-aged appliances to fit the race to the moon made the home a hub of technology for the first time as the modern kitchen was truly born in the Ranch. 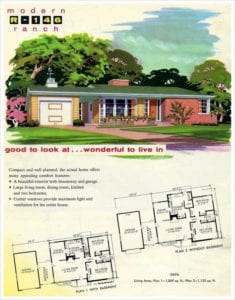 The Ranch style home was a simple home. Almost always a one-story home (though there were some design variations such as the split-level ranch most common in the mid-Atlantic states) with a low-sloping roof these homes reflected the modern design aesthetics displaying simple streamlined almost minimalist architectural features. Gone were the wide overhangs and decorative rafter tails of the pre-war Bungalows the Ranch home had an almost utilitarian feel.

Every architectural style is a reflection of the time in which it was popular and the Ranch style is no different. In a time when America focused on things like efficient manufacturing, homogeneity, modern technology, and simplicity, is there any other architectural style that would fit other than the Ranch home?

Ranch style homes were typically asymmetrical in layout with a L or U-shape often. The attached garage showed up first as a design element of the mid-century Ranch as the automotive culture truly boomed. Americans loved their cars and what better than a room in the house for their favorite possession?

Clad with modern materials like stone and brick veneers rather than the solid brick construction of the previous generation these homes could be assembled very quickly and very inexpensively. Asphalt or wood shingles, plywood, and a new product called “Drywall” made the finishing even faster because now there was no waiting for lime plaster to cure before the interiors could be painted.

Wood floors were still common in Ranch style homes but another newer more modern flooring called Terrazzo was being installed more and more often. Terrazzo was such a hit in the mid-century due to its almost zero-maintenance and hard as a rock construction it could hold up to anything and it gave a clean modern look to your house since it was available in lots of varieties.

Large picture windows, sliding glass doors, and multi-paned steel windows with faux shutters (my biggest pet peeve!) were a common feature rather than the more common wood windows of the past. People wanted an open and bright house in order to see and enjoy nature from the newly climate controlled interior. 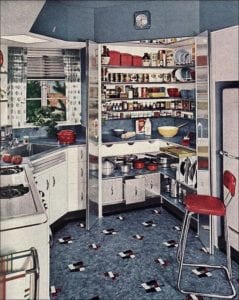 With the advent of central heat and air conditioning, homes could be built without the necessity of all the passive cooling and heating measures of the past. Energy was relatively cheap after WWII until the energy crisis of the 1970s and the homes built in this time period (include many Ranch style homes) are sadly some of the least energy efficient homes ever built. Without the passive cooling architecture like double-hung windows and wide overhangs of the past these homes were woefully reliant on mechanical heating and cooling.

The kitchen was another part of the Ranch style home that saw big changes from previous generations. It wasn’t just the amazing bright formica countertops, but all kinds of advancements were made in consumer good during the 1950s and 1960s. Dishwashers, washing machines, clothes dryers, electric ranges and ovens, blenders, and the list goes on. Most of the common small and large kitchen appliances we rely on today were either created or truly came of age during this time period. The microwave even made its first appearances in the late 1960s kitchen.

In the 1970s and 1980s the Ranch style feel out of favor as Neo-Ecclectic styles took the stage, but for about 20 years the Ranch ruled the scene as the American home. And if you’re lucky enough to own one of these pieces of mid-century madness, treat her well because these old houses truly are a time capsule to a different time.