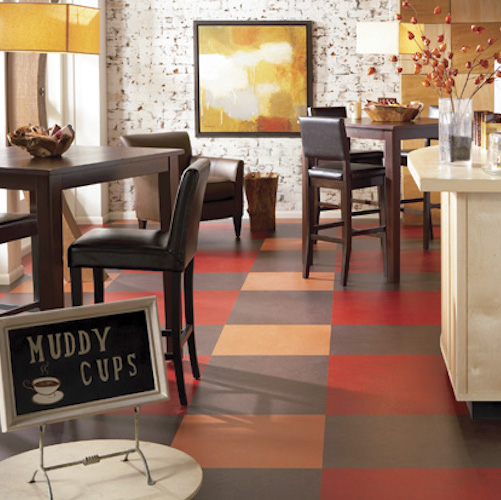 Linoleum flooring was the first on the scene and has been a workhorse in homes and industrial settings for over 150 years. Then almost 100 years later vinyl flooring came along bringing new styles and patterns to the scene. Each one has its advantages and disadvantages, so do you know which flooring material is right for you?

Linoleum was invented in 1860 by Englishman Frederick Walton. Quite by accident, he noticed that dried linseed-oil formed a strong, yet flexible film of the top of an oil-based paint can. He spent nearly a decade toying with the process by adding natural ingredients like pine rosin, ground cork dust, wood flour, and a canvas or juke backing to the dried linseed-oil he patented linoleum.

Linoleum was slow to take off, but eventually became an affordable flooring alternative for homes and businesses. Compared to other flooring options of the time like hardwood and tile, linoleum provided better moisture resistance and a lower price. Combine that with today’s focus on natural materials that are eco-friendly and linoleum is one mean, green flooring option.

Linoleum is considered a resilient flooring like vinyl and creates a soft surface to walk and work on. Because of this characteristic, it was installed on most US Navy ships and is still used on submarines today. Its popularity peaked in the 1950s when it was slowly replaced by the even more affordable vinyl. However, in recent years, it has reappeared as Marmoleum, which is made just the same as the original linoleum. If you’d like to purchase Marmoleum, the best pricing and selection is at Green Building Supply.

Vinyl flooring was introduced to the public at the 1933 World’s Fair in Chicago. It was relatively easy to install and could be purchased in tiles, or as a large sheet that was cut to size, much like linoleum.

In the lean times of the Great Depression and WWII, a very inexpensive flooring option like vinyl was bound to catch on, and it did. However, it wasn’t until the 1950s and 1960s when vinyl really began to appear in homes across America.

Vinyl flooring is made from a combination of several chemicals. Ethylene (a petroleum byproduct) and chlorine, which adds stability and and gives vinyl its heat resistance. Vinyl is very similar in its composition to PVC (polyvinyl chloride).

With the relative abundance of fossil fuels, vinyl could be inexpensively and quickly manufactured. It is made up of several layers of the material with the top, or wear layer, being the one with the color or easily stamped patterns that became so popular.

Who knows, you may have one or both already in your house. However, for historic homes built before the 1950s, linoleum is the only period appropriate resilient flooring. It’s safer for your family in many ways, easier on the environment, and not much more expensive than vinyl. I like it enough that I installed it in my own home in our guest house project which I’m excited to share with y’all in the next couple months!

20 thoughts on “Linoleum vs. Vinyl Flooring (What’s the difference?)”