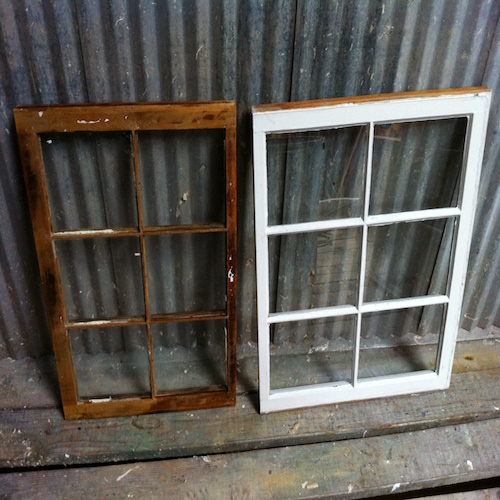 One of my first large scale window restoration jobs was to fully restore all 38 sashes on a 1950s Colonial Revival. I had restored close to 100 old windows by the time this job came around and had gotten pretty good. My glazing putty had nice clean corners and I had developed a pretty good process with my small team.

This job was a big one for us and it had a time crunch to boot. The thick layers of factory applied 1950s alkyd paint on the windows was so tough that it laughed at my infrared paint remover. Steam seemed to have no effect either. The first batch were dry scraped, which took FOREVER. I had to find a way to get the paint and putty out and still make a few dollars to pay my team.

I had heard of dip stripping and knew it wasn’t the best option, but I was out of ideas. I brought the next batch of sashes to a local dip tank operator who gave me back the sashes in a couple days without a trace of paint or putty. Brilliant! So, I decided to bring the remaining sashes to get dip stripped before we finished the restoration process at the shop.

The windows came out beautifully. I was proud of the results and the client was very happy as well. Three 3 months later, I got a troubling phone call though. The paint had begun bubbling up on the windows, particularly on the joints, and a brown ooze was leaking out. I had never had a problem like this before and had no idea how to deal with it.

I was on the phone immediately with window experts around the country trying to figure out what was happening and how I could fix it. I came to find out that what my windows were suffering from was the notorious “brown-ooze.”

The “brown-ooze” is a terrible, terrible side effect of dip stripping windows and doors. It doesn’t happen every time, but when it does it is kind of like cancer. No one knows how to stop it…yet. I’m confident there is a way, but so far the world is still looking for a cure.

What happens is this:

Luckily, I have some of the greatest clients in the world. My client has been patiently letting us experiment on their windows to try and find a cure for this awful diagnosis. Some of our work has been promising and I’ll share those findings as soon as I know they have staying power. Other attempts looked like we had cured it only to have it come back even worse.

It is a tricky issue and one that needs the help of anyone who has ever come across it. I’m hoping to crowdsource a solution by publishing this post since most window restoration experts I’ve spoken to are also at a loss as to how to salvage windows suffering from a bad case of dip stripping.

There is a discussion on the topic at Historic HomeWorks if you’d like to read more.

Next week I’ll walk you through the proper way to restore windows from start to finish so you can be sure to avoid this scenario. Till then, fight the good fight!

33 thoughts on “Dip Stripping Windows: Don’t Do It!”