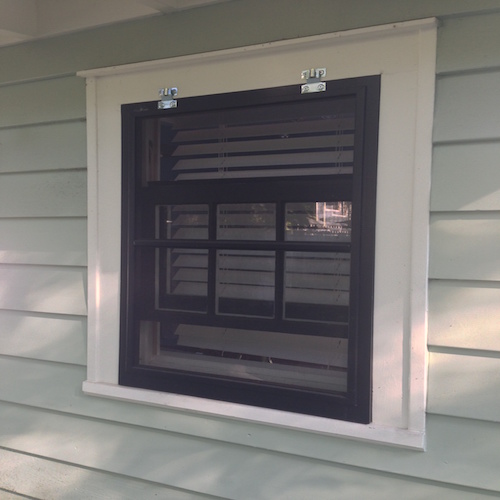 This week’s Ask The Craftsman question comes from Jeremy.

“Why on earth are there DOUBLE hung windows? Everyone just raises the lower sash, but I have a hunch that there may be a reason.”

Jeremy, great question and there is most definitely a reason!

Why Double-Hung Windows Are More Efficient

The cost to make a double-hung window is only slightly more than its single-hung cousin due to the additional weights, pulleys and ropes, but the benefits (especially in the days before air conditioning) are incredible.

If you open both sashes of a double-hung window halfway, it allows for exponentially more air flow than a single-hung window. The opening above the top sash allows stale, hot air to escape while the opening below the lower sash draws in cooler, fresh air.

In the days before mechanical cooling, people wanted as much cool air and breeze as they could get and nothing was more efficient at cooling down a house than opening a bunch of double-hung windows.

It’s simple science. Think of pouring liquid out of a can or bottle. The liquid comes out in gulps in order to allow air in to replace the space the liquid previously occupied. If you cut a secondary hole in the can the liquid will pour out twice as fast since the liquid isn’t impeded by air trying to get back into the bottle.

There was a method to what the old craftsman did centuries ago and more often than not, the design of old windows was based more on basic principles of physics and science than the windows of today.

10 thoughts on “Why Are There Double-Hung Windows?”