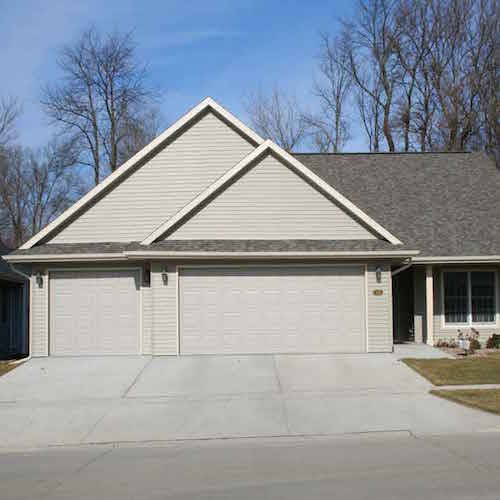 I was driving through the suburbs yesterday on the way to a friend’s place when I noticed something that has never really stood out to me before. House after house, street after street I noticed a pattern.

The houses in this area were standard 1990s – 2000s stucco behemoths typical in Florida. Aside from being some of the most slapdash construction, I noticed that they all shared one design element that defied logic to me. Every one of these homes was hiding behind a disproportionately large garage placed front and center!

When did the garage become so important that it has become the visual heart of the home? I honestly have no problem with a large garage. They’re great for extra storage or having a small workshop or other hobby, but when did they get promoted to become the most important part of our home’s curb appeal?

When garages first came on the scene in the 1910s, they were an afterthought. A small detached shed in back of the home just large enough to fit the small cars people had only begun to learn to drive. As cars got bigger, so did garages, and rightly so. Eventually, someone came up with the idea of an attached garage so you wouldn’t have to walk in the rain to get to your house after parking. Another great idea! As our country’s wealth grew, so did our consumption of automobiles until we reached the 1970s when 2 car households started becoming the norm rather than the exception.

But someone please tell me when the cars we use to get from A to B became so stinkin’ important that we gave them the most prestigious position in our home?! The garage is still an accessory to the home and not the other way around, right? And whose garage isn’t cluttered with junk they plan to someday organize?

Maybe the Question is ‘Why?’

I think more important than “when” is “why”. Are we too lazy to drive all the way to the back of our home? Gone is the front porch and here to stay, for now, is the garage. Did developers and builders decide for us and start putting garages at the entrance to the home or did they respond to our wants and desires?

I would offer that maybe the garage has taken such a prominent position in “architecture” (I use that word in the loosest sense) today because by putting a sprawling 3 car garage at the entrance to our home we are telling the world that we are rich enough to afford 3 cars. Or at least, that we can afford a garage that is the same size as the whole house our parents grew up in.

Whatever the answer may be, I feel like it eats at the heart of what a home is. It is the place where we come to be with our family. It is where we feel safest. It is a place meant for humans, and not for things. It is, as the old saying goes, where the heart is. But if home is where the heart is, it would seem today that our hearts are packed in the garage, somewhere between the Christmas decorations and old exercise equipment.

18 thoughts on “When Did The Garage Become So Important?”