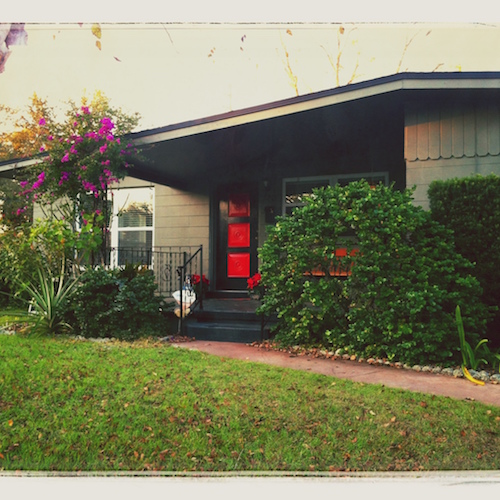 I have a lot of friends and clients whose homes fall into something I like to call the “Historical Cusp.” They don’t live in a house of any particular historical significance, and it’s not quite old enough to have been built by hand with non-standardized materials. But it still maintains some of the characteristics I love so much about historic homes.

Most of these homes were built from about 1945-1960 and they represent a large portion of our housing stock in America. They aren’t the famous Craftsman Bungalows of the 1920s or the grandiose painted-lady Queen Annes, but they are just as important. These homes mark a very distinct time in our history.

The time after WWII was a time of extreme change in the way homes were built, and these houses illustrate that very clearly. Some builders embraced the new materials and techniques that were coming into the mainstream, whereas others fought the change with every fiber in their being. And yet, still, others experimented by mixing the old and new together into these “historical hybrids.”

Mass production had entered the home building industry, and the changes were evident. Homes were built faster and faster, sometimes with questionable integrity and sometimes with brilliant new innovation.

Historical Cusp homes defy the term “standard.” Every home in different locales has so many different ideas that they are intriguing to me to inspect. It was a time of experimentation when American’s weren’t scared of trying new and untested ideas.

Some of the Details in a Cusp Home

Though these homes may fall short in their execution at times they are just as precious as the homes they followed. They are unique. Situated just outside the first-rung neighborhoods they are a historical buffer between the original neighborhoods and the suburbs.

The cusp streets of Florida are filled with mature landscapes of live oaks, podocarpus, and citrus trees galore. The come in all shapes and sizes from one story Ranch styles to vernacular Cottages. And they represent a time of immense prosperity in our country. A time when a TV, an automobile, and a good factory job was all we needed to be successful.

What do you love about your Historical Cusp home?

3 thoughts on “Is Your Home Part of the “Historical Cusp?””