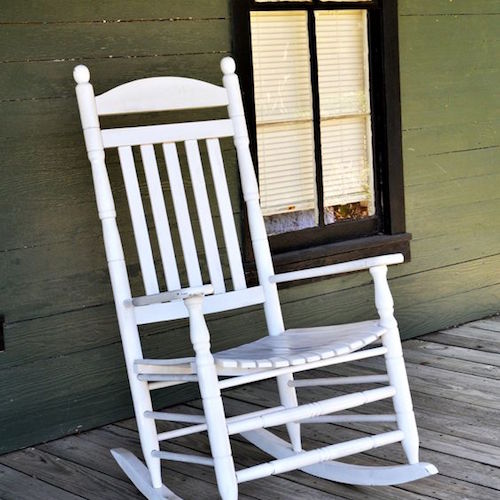 I think it’s time we brought back the front porch. For too long, our garages have been growing, while our porches have been shrinking. We insulate ourselves and our homes to keep the outside world out and the inside world in and we become more reclusive and less social in the process.

Even going back as late as the 70s and 80s in my childhood, we would play outside with the neighborhood kids until the sun went down. The neighbors all knew each other except for that one house that was inhabited by the family that never seemed to participate in anything.

Those were the odd people, the exception to the rule. The hideaways who were either too busy or too disinterested in being a part of the neighborhood. They lived here, but their lives were elsewhere it seemed. Now those couples who were once the exception have now become the rule.

I love a good deck. In fact, I just put a new one on the back of my house. You may be asking, “What’s the difference, really?” Well, a deck is traditionally on the rear of the house, or at the very least, in a more private location meant for the enjoyment of the inhabitants and their invited guests.

There’s nothing wrong with that, but as our society has changed, we have become more private in a lot of ways. Sure, we’ll Instagram pics of last night’s delicious bread pudding and share every single emotion on Facebook, but when was the last time we just sat down and talked with our neighbors? I’d venture to guess it’s not as often as our parents and grandparents did.

A deck is an oasis where we go to get some fresh air and get away from the inside world, yes, but it’s really just an exterior version of the home it’s attached to. The front porch is a wholly different place and experience.

Why The Front Porch Matters

In historic architecture, the front was an important part of the house. It served as a transition between the public space of the sidewalk and the private space of the home’s interior. It was a buffer zone where we still felt safe to sit, but passerby could speak to us or even come into without it feeling intrusive.

The front porch also provided safe place from the snowy cold in the northern states to the blazing sun in the south. It was tempered version of the outdoors that was always more comfortable and protected to sit.

The front porch was originally designed to be sat upon. Unlike the fake porch on some tract housing today, there was room for chairs and actually people instead of just being a holding place for Halloween or Thanksgiving decorations.

The front porch may seem like just another piece of architecture whose time has passed, like the formal dining room. But I think it’s more important.

In these especially divisive times where we surround ourselves with people who regurgitate our own believes back into our faces, we have become closed off to new ideas. The front porch is so much more than a place to enjoy the weather. It really is the place that shows us that our differences are so small and petty, and that those differences don’t matter as much as we think they do.

From your front porch, you see people as they truly are, not just a status update supporting their candidate or political ideal. On the front porch, passersby are people with feelings and worth, not just a label like conservative or liberal, gay or straight, rich or poor, Christian or atheist. They have name, and that name is neighbor. We are all people, and we all contribute to the society we have built.

I may be a Christian, but I’d be a fool to think that I wouldn’t benefit from some knowledge or assistance from my atheist neighbor and vice versa. And just because the yard sign in my yard promotes a different candidate than the one down the street, that doesn’t mean I shouldn’t be at the ready with a cup of sugar and a helping hand for those folks too.

The front porch makes those differences seem more trivial and less relevant to our daily lives. Charlie ‘Tremendous’ Jones once said, “You will be the same person in five years as you are today, except for the people you meet and the books you read.”

It’s up to me to keep reading those books, but meeting those new people and letting them shape who I am? That’s something that the front porch does better than anything else, and that’s why we need to bring back the front porch.

8 thoughts on “Bring Back the Front Porch”