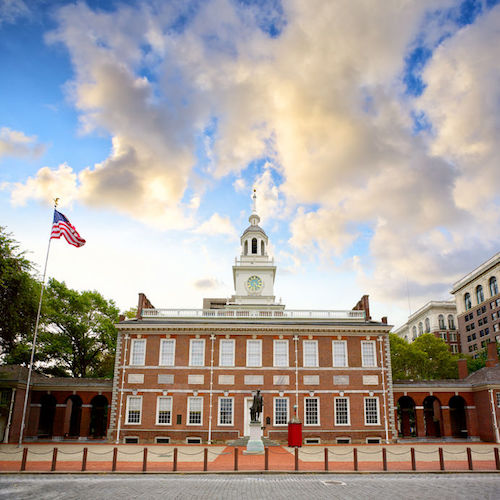 This 4th of July before you light off those fireworks, learn just a little bit about America’s birthday.

Independence Hall is one of the most iconic buildings in America and has quite a history that most of us know little about.

Many people will vaguely recognize the building as having something to do with the American Revolution, but not much more than that.

Here are eight facts about Independence Hall that you probably didn’t know, but will give you the edge the next time you play Trivial Pursuit.

Speaker of the Assembly, Andrew Hamilton, oversaw the construction of what was to become the Pennsylvania State House. It was originally built to house all three branches of Pennsylvania’s colonial government. Master builder Edmund Woolley drew up the designs for the building and construction finally started in 1732, but wasn’t completed until 1748 (without the tower).

The exterior of Independence Hall looks much like it did in the 18th century. Features like marble keystones above each window, a carved wooden cornice and a wooden balustrade stretching between the chimneys on the roof have mostly been preserved over the centuries. A Palladian window graces the south facade.

Today Independence Hall has two clocks and neither were original. The first to arrive was the 40-foot tall grandfather clock on the building’s west end. Added in 1753 by Thomas Stretch, it resembled a grandfather clock, which was carved by Samuel Harding.  The clock’s dials were mounted at the east and west ends of the main building, connected by rods to the clock movement in the middle of the building.

Sadly, the giant clock was removed about 1830 and a replica was built and installed in the summer of 1973. On a side note, it took the State of Pennsylvania 6 years to pay Thomas Stretch a single dime for his work! Talk about a collection problem.

The steeple clock is another story. The original wooden steeple was demolished due to structural problems in 1781. And it wasn’t until 1828 that a more elaborate steeple was designed by William Strickland. The design was controversial at the time because it deviated so much from the original steeple.

The decision to include a clock was more a product of 1820s life, which was ruled more by time than was 1730s life where people didn’t care, nor need to know the hour or minute. It’s this version that still stands today.

3. The Declaration of Independence Was Signed

Most folks know this and it’s one of the reasons Independence Hall is named as it is today. The Pennsylvania legislature loaned out the famous Assembly Room for the meetings of the Second Continental Congress, which is when the Declaration of Independence was debated and signed.

The motion to declare independence was approved July 2, and it only took Thomas Jefferson two days to draft the document that would later be approved and signed as the Declaration of Independence.

It was also at this time that George Washington was appointed as Commander in Chief of the Continental Army in 1775. The Declaration of Independence was finally signed by all the delegates in this room on August 2, 1776.  The Assembly Room has been restored to the way it was in the late 1770s and serves as a museum today.

4. The Constitution Was Approved

Between May 25 and September 17 of 1787, the Continental Congress once again met at Independence Hall to hash out the details of the US Constitution. The earlier approved Articles of Confederation were proving to be ineffective, and in these four months, the Founding Fathers created one of the most incredible documents ever.

George Washington later described the fact that Congress had accomplished this in just four shorts months as “Something a little short of a miracle.”

Following his assassination, Lincoln’s body lay in repose here for two days. Lincoln had earlier given addresses at Independence hall as President-elect and his zeal for Independence and liberty was reflected in his love of the history of this building.

During those two short days, more than 85,000 people paid their respects to the late President.

The basement of Independence Hall was used as the city’s dog pound for a short time. It hardly seems fitting such a landmark today, but practicality ruled and the city needed the space.

The much larger Centennial Bell, hangs in the new steeple today. The Liberty Bell and its famous crack was displayed on the ground floor of the hall from the 1850s until 1976, and is now on display across the street in the Liberty Bell Center.

In 1816, the city of Philadelphia purchased the entire block that Independence Hall sits on today in order to stop a real estate scheme to develop the State House Yard, which would have included demolishing Independence Hall.

The State House as it was known then was not yet revered as the founding place of America. It wasn’t until 1824 and a visit by the Marquis de Lafayette who had served under George Washington as a young soldier and later became lifelong friends with the first President.

His remembrance of the American Revolution, which was nearing its 50 year anniversary, and his disappointment in the neglected state of the old building ignited a new passion to restore this special place. It wasn’t long after his visit that the name Independence Hall began to be associated with the state house. And the rest, as they say, is history!