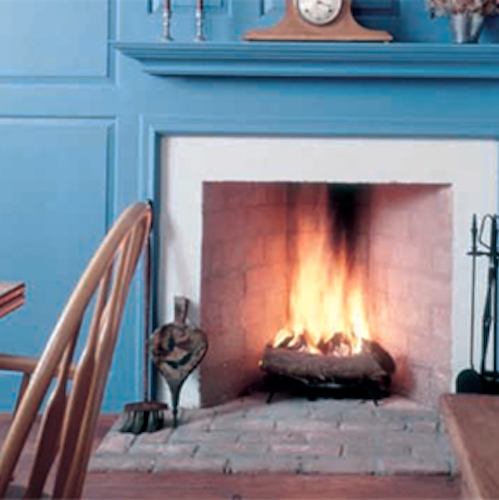 Fireplaces have been around since the dawn of housing in one shape or another. For hundreds of years, fire was the only way to heat buildings and with indoor fires, you need a fireplace.

It wasn’t until 1795 that the fireplace was finally perfected by a brilliant American named Benjamin Thompson “Count Rumford.” His work instantaneously revolutionized fireplace and chimney construction.

Strangely, most people today have never heard of Count Rumford, even though most fireplaces built between 1796 and 1850 are Rumford fireplaces. The mystery is that after the 1850’s, Rumford fireplaces were not built as often and by the 1900’s, most masons had forgotten or never learned how to build a proper fireplace anymore!

Sadly, the modern fireplace is a poor substitute for the simple effectiveness of a Rumford fireplace. How did we step backward in our knowledge of fireplace design so much? The answer may surprise you.

Before Rumford’s redesign, fireplaces had plenty of issues.

A Rumford fireplace cures all those problems with simple tweaks in design!

A Rumford fireplace is taller and more shallow than a modern fireplace. When most people look at a Rumford fireplace, they mistakenly assume that it has been bricked in and no longer functions because of how shallow it is, or that the fire would easily fill the room with smoke. Neither is true.

Rumford fireplaces draw smoke up and out the chimney better than any other design. And the heat they fill a room with is many times that of our modern fireplaces.

Rumford redesigned a few elements on the fireplace to make it work the way he wanted.

First, from his studies on the 3 types of heat he determined that fireplaces warm a room through radiant heat. The more direct line of sight objects in the room had with the fire, the more they would be heated.

To accomplish this, he made two changes. He changed the dimensions of the firebox giving it a much more shallow opening that set the fire out into the room and making it considerably taller.

The other change he made was to the covings or sidewalls. On regular fireplaces, these are normally squared off to form a square firebox. Rumford designed his covings at a severe angle to reflect more heat into the room.

The next thing to fix was the poor drafting of fireplaces. Rumford redesigned the fireplace’s “throat” which is the space that draws smoke up into the chimney. By positioning and sizing it more precisely, he was able to design a fireplace that effectively removes all the smoke from the fire below into the chimney.

His design also called for a specific and slight slope to the fireback (the wall at the back of the firebox).

These small tweaks created an incredibly efficient fireplace that became the new standard.

So why did we revert to poorly designed fireplaces by the end of the 19th century?

With the introduction of boilers, radiators, and eventually forced heat systems, the fireplace was relegated to second class status. No longer the primary source of heat- architects, masons and builders gave little thought to its functionality.

Fireplaces became more architectural element and less functional part of the home. Even though it was no longer a necessity, society has never been able to remove it completely from the home. From my desk here in Orlando, FL I can see my own fireplace (hardly necessary in our hot and humid climate).

If you have a modern fireplace, don’t give up hope. Your fireplace can be remodeled to make it into a Rumford by a good mason without costing an arm and a leg.

The fireplace is still the heart of the home. A place where we gather as a family and sit transfixed by the dancing flames and the warmth it brings on a cold winter night. That was what Count Rumford wanted. A simple fireplace that just worked.

12 thoughts on “What is a Rumford Fireplace? (and why it’s better than your fireplace)”