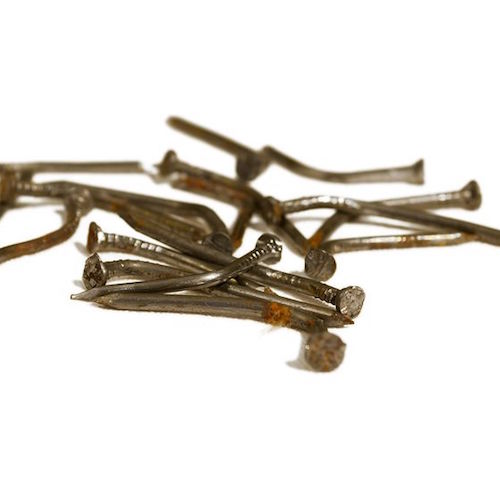 In my grandfather’s garage there was a shelf above an old carpenter’s table that was full of mason jars. Each jar had different types of fasteners. Nuts, bolts, machine screws, washers, nails of every size. Anything you could possibly need to attach one thing to another could be found in those jars.

For a little kid, that garage was a place of wonder. I could build and create anything my curious mind came up with. Grandpa would show me how to assemble old pieces of cull lumber into things like a tool box or a step stool. Often, we’d work together to build something. I can still remember feeling a huge sense of accomplishment when I finished a project.

I remember one time in particular when I was helping him fix some laundry shelves in the garage. We took the old shelves down and he instructed me to take the nails out of the lumber while he measured for the new setup.

After I took the nails out, I gathered them up and walked over to the trash can. Just as I put my hand over the trash can he grabbed my wrist.

“We don’t throw nails away.” he said.

“But these are all used and bent.” I stammered.

“I suggest you straighten them out then before putting them back in the jar.” he replied.

You see, my Grandpa was born in the 1920s and was a product of his generation. A generation that lived through the lean years of the depression. He also sacrificed deeply to serve his country in WWII while my Grandma rationed supplies back home.

Their generation wasted nothing. Everything was used and reused until it could no longer be used again.

Houses were built back then with cut nails, which were much more expensive, and so the thought of throwing away even one perfectly good nail was unthinkable.

It was a generation where bent nails were straightened to be used again, socks were darned to make them last a few months more and jeans were patched when they got holes. Throwing something away that could be repaired was viewed as shamefully wasteful and absurd.

Today, things are much different. Almost everything we buy is designed to be disposable. Disposable plates and silverware, plastic groceries bags, replacement windows, shoes that can’t be re-soled.

Manufacturers figured out that consumers prefer cheaper goods that are designed to wear out quickly and be purchased again and again. They play to the endorphin rush you get from a new purchase. Nobody is excited to repair a damaged old window, but to buy a sparkling new one makes you feel good about yourself.

When things break, we drive to the home improvement store and buy a replacement. Lamp doesn’t work? Throw it out and buy a new one. Front door lock is sticking? New lock-sets are on aisle 12.

This replacement mentality has created what I call the “Replacement Generation.” A generation who grew up never learning how to fix things. They went to the hardware store with their father, but only to pick up replacements. Granted, most things are built so poorly today that trying to repair them is an exercise in futility anyway.

We spend so much time at work and our kids at extracurricular activities like karate, soccer, band practice, travel baseball that it’s no wonder we don’t have time to fix anything, even if we knew how.

The replacement generation is a wasteful group, especially when you compare it with previous generations. The furthest back I could find figures was 1960, but they reveal a 64% increase in the amount of trash produced per person per day. In 1960, each person produced about 2.68 lbs. of trash per day compared to 2011 when we each produced 4.40 lbs. per day.

The thing that really breaks my heart to see is when the replacement generation gets their hands on an old house.

Old windows are usually the first to go. Then the plaster walls come down to make room for added insulation. Wood floors are replaced with laminate or covered in tile.

The house is thoroughly “updated” when all it needed was repair. The historic character is lost and the house is never the same. The endless cycle of replacement has begun. And once it starts it can’t be stopped.

If you don’t know how to repair things, you can learn. There are workshops around the country that will teach you all about repairing old houses. Never swung a hammer? There is someone who will teach you.

Your don’t have to be a part of the replacement generation if you don’t want to. You can learn the skills you need. And whether it’s here in our Orlando shop, or in your own hometown, there is someone who can teach you.