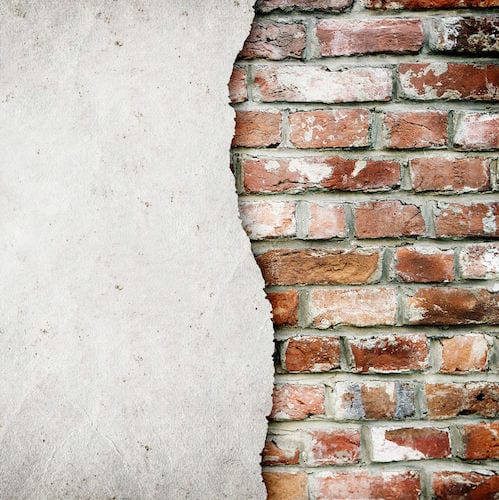 Old brick buildings across the country have a tendency to get painted over the years by owners looking to “improve” their look. Whether its just a chimney or the whole building that’s been painted, a lot of us want to go back to that original brick look.

So how do you strip paint from century old brick? Well, the first thought a lot of folks have is sandblasting old brick. There are countless videos and well meaning bloggers who will tell you that sandblasting is the answer, but what they won’t show you is what happens after sandblasted brick is exposed to the elements for a few months.

In this post I’ll show you the dangers of sandblasting old brick and how that can take what would have been a relatively low maintenance brick building and turn it into a crumbling maintenance disaster.

How Old Bricks Were Made

In their simplest form brick are just clumps of clay mixed with varying degrees of shale and sand. Until the mid 1800s, most bricks were formed by hand and set out in a brick yard or in tunnels to dry for a couple weeks until they were ready for the kiln.

The kiln was often built using just these “green” bricks as the walls so as to act as their own kiln. The bricks were cooked at a lower initial temperature slowly to remove any remaining water and then once they were dry enough, the fires were stoked to bring the temps up to around 1800°F before letting them slowly cool down.

Once the bricks had cooled enough, the kiln was disassembled and the bricks were sorted. If only raw bricks were used to build the kiln, the bricks from the outermost walls were kept to be burned again in the next kiln. Some bricks that were closest to the fire received a glaze from the sand that fell into the fires and became vaporized and deposited on the bricks. These less attractive bricks were used in the interior courses of the walls. Bricks that became severely over-burned and cracked or warped were called clinkers and were used less for structural purposes and more for decorative uses like gardens.

This early process of making bricks resulted in much softer and less consistent bricks than what we have today. Today, the bricks are fired evenly and under controlled high temperatures where every brick gets the same amount of heat resulting in much harder bricks.

What Sandblasting Does to Old Brick

Imagine that bricks (especially old bricks) are a loaf of bread, after all they were baked much the same way! Just like how a loaf of bread develops a crust as it is baked in the oven, bricks also develop a protective skin on them from the firing process. That skin keeps them protected from the elements and just like bread, without a crust, they won’t last long without it.

Spalling occurs when the brick slowly self-destructs, turning into a powder and falling apart. Spalling can also occur from repointing with a mortar that is too hard which causes the face of the brick to break off exposing the softer interior. Sandblasting causes this en masse as ALL the sandblasted brick is now exposed and weakened. I’ve seen whole walls turned to powder within months of sandblasting depending on the climate.

It’s a big word and it’s as frightening to spell as it is to see. This is not a direct cause of sandblasting, but still an issue because it seems that a lot of people like to sandblast old brick and then apply a sealer to the face to prevent spalling or other damage to the weakened brick. That’s where the problem starts.

Old brick and lime mortar are very breathable building materials that are constantly taking in and expelling water through both sides of the wall. If you seal up one side of the wall, then you prevent that natural breathability from happening.

Moisture builds up within the brick on the underside of the sealer and minerals are deposited just below the surface of the sealer. Eventually this build up can cause the exterior 1/4″ or more of the brick to be forced off the wall and fall to the ground.

Not only does it damage the structural integrity of the brick, but the appearance of sandblasted brick is destroyed too. Any decorative tuckpointing or tooled mortar joints are blasted away along with the face of the bricks, leaving a uniformly rough scarified surface that doesn’t have the same attractive appearance as the original.

An Alternative to Sandblasting

So, what are you to do if you need to remove paint from old brick? Usually the best solution is chemical paint stripping. Using a product like PeelAway1, I have had great success removing decades of old paint from brick.

You brush the paste onto the brick, cover it in a special paper that comes with it, and come back the next day to peel the paper (along with most of the paint) off the wall.

I’ve written an earlier post about some testing I did with this product. It was tested on wood in the post, but works much the same on brick and other masonry.

I’m hoping that by now I have convinced you to skip sandblasting as a method of paint removal. It works well for stripping some metals and concrete, but other than that it usually creates more problems than it solves.

Protect that old brick and keep the sandblaster away.

41 thoughts on “The Dangers of Sandblasting Old Brick”