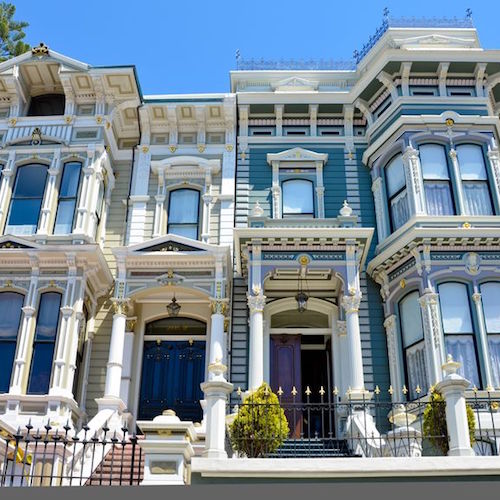 The Italianate style was an elaborate architectural style popular in the U.S. at much the same time as the Gothic Revival style, from the early 1840s until the mid 1880s. The Italianate style was extraordinarily popular in the northeast, midwest and particularly common in San Francisco, which transformed from a small village into a major American port city from the 1850s to the 1870s.

The Italianate style was closely tied to the Picturesque Movement which was, like most things in architecture, an opposite reaction to the classical ideals in architecture like the Adams and Georgian styles that dominated America for the last two centuries.

Architectural trends have a funny way of swinging from one extreme to another and the ornate detailing of the Italianate was a perfect example of rebellion against the reserved classic lines of the past.

There are a few giveaways that you’re looking at an Italianate house. The first are the decorative bracketed cornices and eave brackets that are placed in excess along the underside of the roof overhangs. Whether it is an urban townhouse like New York City’s famous brownstones or a country house, these eave brackets are everywhere and often very ornate. Some of these are just plain stunning.

Another feature that screams Italianate style is pedimented windows and entryways. Tall, slim and arched windows with Greek Revival style pediments above them are very common. Sometimes the windows are rectangular but feature detailed upside down U-shaped exterior trim work above them giving the sense of arched or partially arched windows. Bay windows and grouped windows are also used extensively in this style relying on the former to give a sense of a tower and parapet being a part of the home.

Doors are another elaborate detail on Italianate style homes. Often double doors are present with multiple large portions of glazing (glass). The area around the doorway (the enframement) are equally as elaborate as above the windows and cornices found on these houses.

Italianates are almost exclusively two and three-story homes that have a strong vertical massing as opposed to the low meandering feel of the American Craftsman style. This vertical massing made this style an excellent fit for urban locations, and it was there that it thrived and some of the finest examples still remain today.