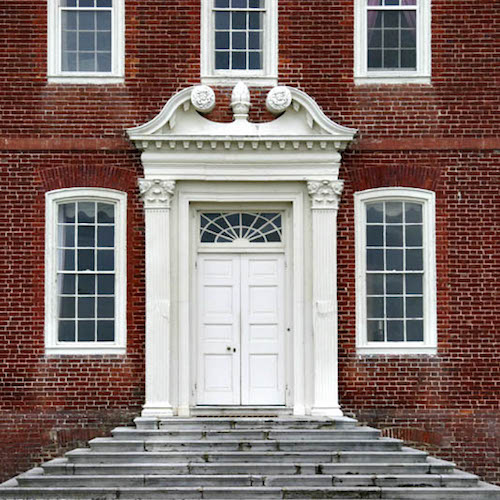 In America’s early colonial period, times were tough and architecture was not foremost on settler’s minds. Survival was the name of the game and the architecture of the time reflected that with simple utilitarian homes.

By 1700, America’s population had grown into the millions and its citizens had begun to attain some wealth for themselves. This prosperity led to a desire for more and nicer things and the architectural trends from Europe began to be imported to the New World by the well to do.

I don’t usually lump two architectural styles together, but the Georgian and Adam styles are so similar that any discussion on one has to reference the other.

The first real import to the new colonies was the Georgian style which was a pulled from the Italian Renaissance that had only just reached England by the mid 1600s.

This style was one of the most long lived styles in American history and faded from popularity only after America won her independence from England in the 1780s.

Georgian houses were most commonly side gabled homes but there are gambrel roof and hipped roof examples as well as many townhouse versions in old colonial cities across the eastern seaboard.

Sadly, a lot of the Georgian architecture in America was torn down in bigger cities like Boston, New York, and Philadelphia that experienced a lot of growth in the 19th and 20th centuries. The old buildings were torn down to make room for newer structures.

But in towns that experienced relatively little population growth since colonial times there are still awesome examples of Georgian architecture. Town like Newport, RI; Annapolis, MD; Charleston, SC all have loads of this early style of American architecture.

The Adam style grew out of the work of three brothers who owned the largest architectural practice in Scotland, most notably James and Robert Adam. From my perspective, the Adam style was basically a refinement and embellishing of the preceding Georgian style.

The structure and major components were the same, but the manner in which they were employed was changed.

Both of these styles held sway across much of America until the 1820s when the Greek Revival style came to prominence. These styles are sometimes referred to as the Federal Style since they were popular during the founding of America.

To find any original examples of Georgian and Adam architecture, you’ll have to look to the original 13 colonies and their immediate neighbors. These two styles always make me feel like I’m wandering through an old colonial part of town.

They don’t have the elaborate details of the Queen Anne or the earthy craftsmanship of the American Craftsman. What they give is an air of strength and sturdiness that our burgeoning country needed to display at a time when our survival was still in question to the rest of the world.

To me, these styles are the bedrock of architecture that the rest of our country was built upon.