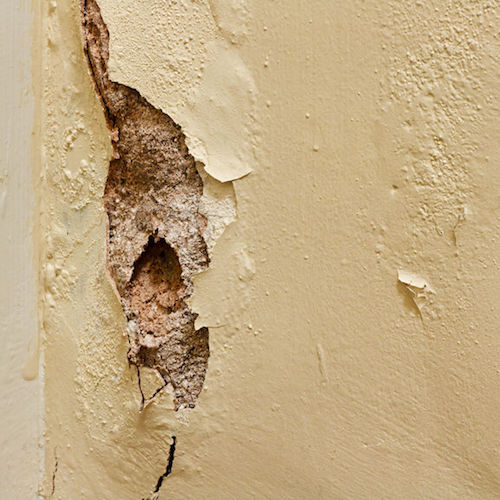 After a century or so, plaster walls and ceilings can develop a variety of problems from neglect or abuse. Your plaster can tell you a ton about issues that may be developing around your house if you know how to listen to what it is saying.

This is probably the most common problem people notice with their old plaster walls. The good news is that cracks in your plaster don’t necessarily mean trouble. Sometimes they are a warning sign, but other times they’re just like wrinkles on our faces that appear with age. How do you know the difference?

This is the early signs of water damage to plaster. Brown water stains will begin to show up soon after a leak begins. The easy way to solve them is with a stain blocking primer, but that won’t do anything to resolve the water issue. You need to find the leak and seal it up before things get worse. Don’t delay.

Once the water damage becomes severe, then the plaster will begin bubbling and bulging. You may reach this stage without any noticeable water stains, but when this happens, a portion of the plaster will have to be removed and patched. Use the steps in my post How To: Patch Plaster to repair the damaged sections.

If not repaired soon, the damage will just continue and you run the risk of developing mold in the affected area. Water and plaster are not a good combination, so find the source of the leak first and do everything you can to stop the water.

Plaster is a pretty incredible material. I have seen a plaster wall come completely loose of the lath and bulge out about 4 inches from the wall without falling or even cracking! It’s not just cracks that mean plaster has come loose of its lath. Just like delaminating cracks, bulging plaster looks exactly the same, except this time there aren’t cracks in the surface.

If you see bulges in your wall or ceiling and the plaster can be pushed back up against the wall, then it’s time to reattach that section of plaster. Use the steps in my post How To: Repair Plaster Walls to get things stabilized again.

Remember, plaster is the canary in the coal mine and these are just some of the most common plaster problems. It will start showing you leaks and settling before anything else, so look for the signs and fix the issues before they demand your attention in a more expensive way.

If you have any plaster issues not mentioned here, leave a comment below and I’ll try to answer as many as I can about how to resolve the issue. Good luck and watch that plaster!

78 thoughts on “How To: Diagnose Common Plaster Problems”